IOTA (MIOTA) is among the few digital assets in the green after BTC started its $12k attempt. IOTA’s digital asset (MIOTA) has gained steadily in the crypto markets since several investors have their sights fixed on Bitcoin (BTC) and the DeFi sector. IOTA is at the helm of cryptocurrency recovery as of Wednesday and has fixated on the efforts to bring down the $0.40 resistance. The technical image highlights fresh attempts as IOT/USD upside rally garners pace beyond $0.4. At press time, IOTA’s (MIOTA) price is up 12.45 percent trading at $0.3786, with a $1.1 billion market cap over the last 24 hours. The distributed ledger technology platform built to support the internet of things, IOTA, has confirmed on twitter the launch of “Chrysalis,” or IOTA 1.5, next week. The project’s native token upside rally garners pace on anticipated IOTA “Chrysalis,” Upgrade. The tweet announcing the upgrade says Chrysalis will bring significant upgrades in performance, usability, and reliability.

*At press time, IOTA’s (MIOTA) price is up 12.45 percent trading at $0.3786, with a $1.1 billion market cap over the last 24 hours
*The technical image highlights fresh attempts as IOT/USD upside rally garners pace beyond $0.4
*The distributed ledger technology platform built to support the internet of things, IOTA, has confirmed on twitter the launch of “Chrysalis,” or IOTA 1.5, next week 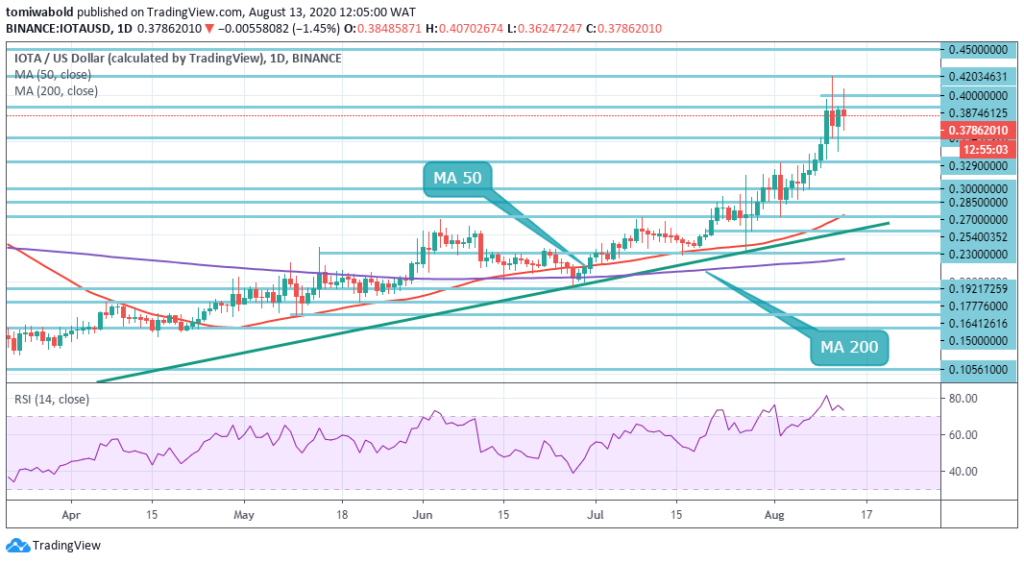 IOT/USD bulls have stayed in control of the MIOTA token market. The price has gone up from $0.3624 to $0.4070 as buyers aim to stay afloat the $0.40 threshold. The price is back trending above the daily horizontal support line at $0.3543 around the recent buyers’ confluence zone, while the RSI continues to hover inside the overbought zone. These two analyses show that IOT/USD upside rally may garner pace before its bearish correction.

The upward-looking MA 50 as well as the ascending trendline support since March 12 put this situation to light. Since July 1st, the price of IOT/USD has remained floating on its moving averages of 50 and 200, reinforcing the bullish scenario. IOT/USD has four levels of stable support at $0.354, $0.329, $0.300 supported on dips by MA 50 at $0.270. The trend shows increasing bullish momentum. 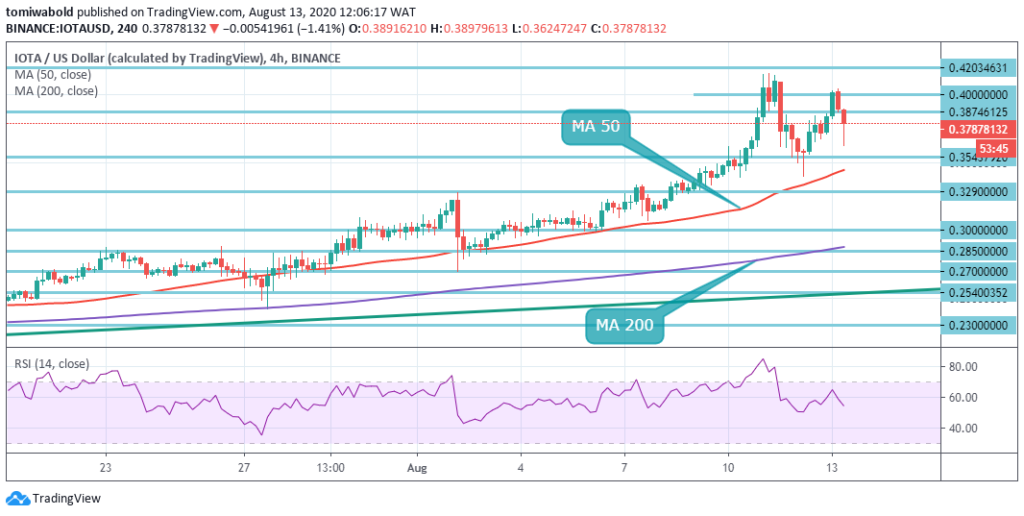 The short term scenario on the 4-hour chart depicts a rising price corresponding to the MA 50, IOT/USD is hovering above both MA 50 and MA 200. However, the 4 hour RSI indicator is close to its midlines while trending down from the overbought zone. If declines come into the picture, IOTA is likely to bounce off initial support at $0.354.

After staging a solid technical correction from the $0.40 resistance area, IOTA is attempting to find a new short-term directional bias. IOT/USD bulls need to hold price beyond the level of $0.354 to achieve another key yearly high test, around the $0.420 mark. A violation of the support level of $0.354 presents more losses to the region of $0.329 and below to the downside.