According to a report published by Business Standard, the state-run cryptocurrency (Laxmi Coin) has received the nomenclature of Laxmi after the Hindu goddess of wealth and prosperity. Whether or not this cryptocurrency form receives the blessings of the divine Hindu goddess is something which time shall outlay.

A committee was set up by the government to discuss viable methods and after-effects of launching Laxmi Coin- India’s own cryptocurrency medium. The committee consists of topgun officers from the Securities and Exchange Board of India (SEBI), RBI, the Central Board of Excise and Customs (CBEC), Income Tax Department, and the Financial Intelligence Unit.

This has created a vacuum that can be filled only when the Indian policymakers come out with their own virtual currency form which will follow the legal route to be given the title of a fiat cryptocurrency. This new currency (Laxmi Coin)  which is termed by many as the alternative to the traditional Indian rupee will require amendments in the ongoing Currency Act to proceed in its action path which in turn will increase the time lag of converting this cryptocurrency dream into a hard-rocking reality. Whenever the decision is taken, the Laxmi Coin cryptocurrency will fall into the domain of Reserve Bank of India (RBI).

Sudarshan Sen has been quoted as saying:

“Right now, we have a group of people who are looking at fiat cryptocurrencies. Something that is an alternative to the Indian rupee, so to speak. We are looking at that closely.”

“I won’t be surprised if the government comes up with its own cryptocurrency because banks are trying blockchain as a technology and to make blockchain work it would need some cryptocurrency. Since it doesn’t trust Bitcoin it may come up with their own currency.”

Just when China imposed a ban on ICO, Dubai is planning to become the first Bitcoin powered nation by implementing the same in its financial architecture. Dubai has even planned to Implement Blockchain Technology in it’s all functions by 2020.

However Indian lawmakers feel it is of paramount importance to provide Laxmi Coin cryptocurrency form with a solid legal backing rather than going with the flow and accepting the digital craze with open arms to safeguard against momentary setbacks.

Though the launch of Laxmi coin cryptocurrency has not yet officially been announced, there are many websites posing as Laxmi Coin cryptocurrency and asking people to invest in it by buying the Laxmi Coin. KryptoMoney.com advises it’s readers to stay alert and beware of scams. Compare the safest cryptocurrency exchanges.

As mentioned above rumours are spreading that the Indian government might launch its own cryptocurrency called Laxmi Coin. But again to highlight, it is not yet confirmed by any official source. While continuing our research, we found out that there is an official website for Laxmi Coin cryptocurrency named “laxmicoin.com”.

As per the website, it is announced that Laxmi Coin will be launched on 1st March 2018 along with the release of its whitepaper.

The team behind Laxmi Coin

As per the laxmicoin.com, the following is the team behind Laxmi Coin: 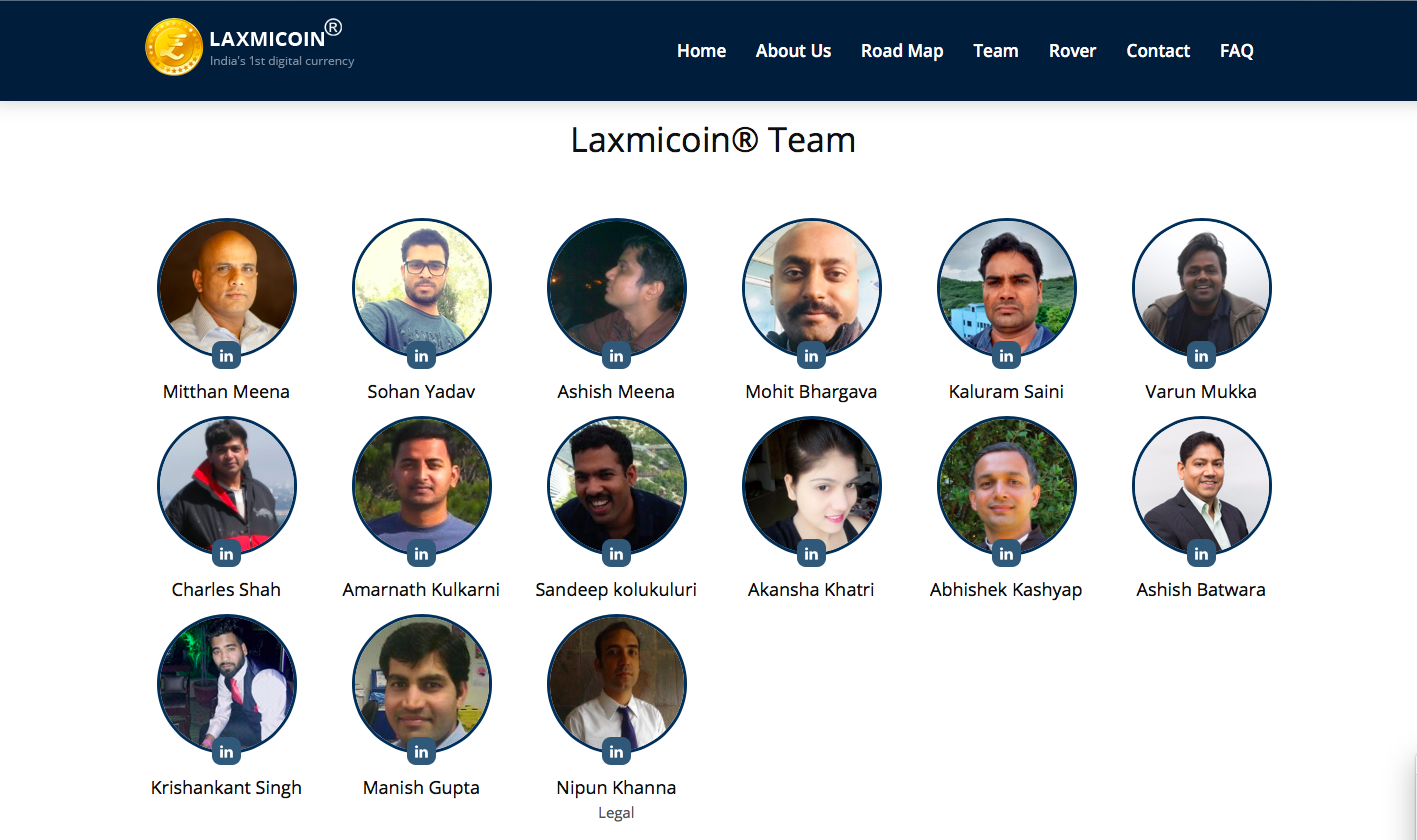 NOTE: It is clearly stated on the FAQ section Laxmicoin.com, that they are not associated with Reserve Bank Of India.

So, we again caution our readers to don’t consider the above as any official cryptocurrency of India.

More countries to launch their own Cryptocurrencies

The news came in late August that Estonia is also willing to launch its own cryptocurrency. Estonia’s own cryptocurrency named “Estcoins” for being put to use by Estonian e-residents across the globe conducting business over internet medium has been hogging the limelight since the last few days. This new cryptocurrency form will be developed in association with Vitalik Buterin, the founder of Ethereum.

Similarly, the Russian Central Bank also gave a positive nod to cryptocurrencies and might introduce their own cryptocurrency. The Russian central bank will also start imparting education about the cryptocurrency plethora amongst common masses. Mikhail Mamuta, the head of Consumer Protection Services at Central Bank Russia feels that this move shall minimize basic mistakes increasingly committed by investors.