Will Bitcoin (BTC) Bulls Launch Back at $12,000 in a Weekend Skit? Analysts Weigh Up As Tether (USDT) Market Cap Surges

Bitcoin (BTC), the first and largest cryptocurrency by market cap started the week gallantly. Bitcoin bulls in an acclaimed feat drove prices as high as $12,086. The rest of the crypto market followed ensuite as seen in breathtaking rallies embarked on by Chainlink (LINK), Tezos (XTZ), and Compound (COMP).

However, Bitcoin was rejected at the $12,000 key level and plunged to $11,700 shedding nearly $500. In the week, Compound (COMP) breathtaking rally was halted by YAM token implosion as well as other DeFi cryptocurrencies.

The significance of Bitcoin’s $12,000 psychological level is noted as it is regarded as that which will usher Bitcoin into retesting its all-time highs of $20,000. Once the key resistance between $12,000 and $14,000 is shattered, Bitcoin will face practically no resistance till it reaches $20,000, analysts state. 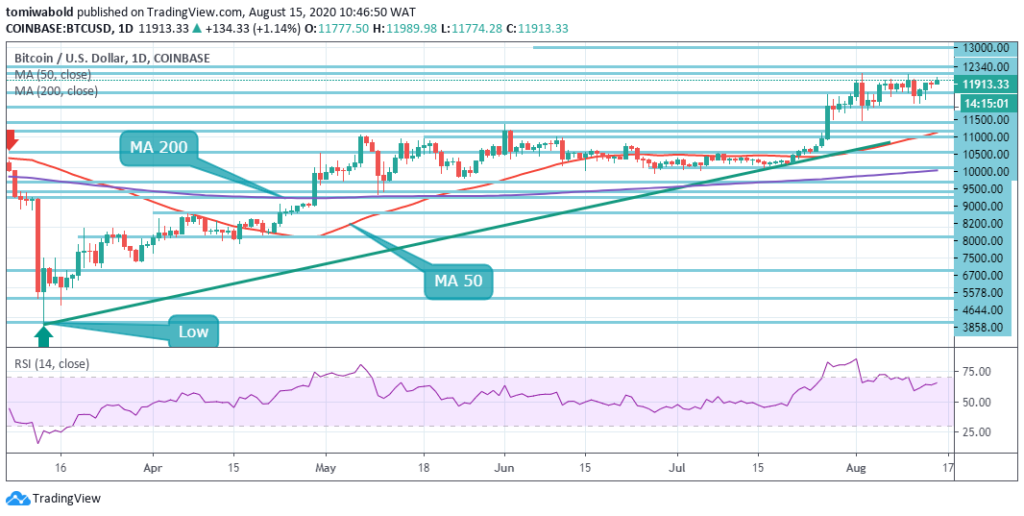 Will Bitcoin (BTC) Bulls Launch Back at $12,000 As Tether (USDT) Market Cap Surges

Weeks back, Bitcoin took a shot at the $12K key psychological barrier but was met with stiff resistance resulting from the lack of follow-through amid leveraged interest earlier this week, Bitcoin bulls took another shot, enabled in part by neutral funding rates, but faced the same scenario.

Notably, most of Bitcoin’s major rallies occurred during weekends which is prompting analysts to think that Bitcoin bulls may take another shot due to rising Tether supply believed to always lead up Bitcoin bull run.

Coinmetrics gave the value of Tether (USDT) market capitalization as of August 14 to be more than $12 billion. Some analysts believe that Tether rising market cap is positivity for Bitcoin (BTC) in the long term while some investors fear that it subjects the crypto market to vulnerability. 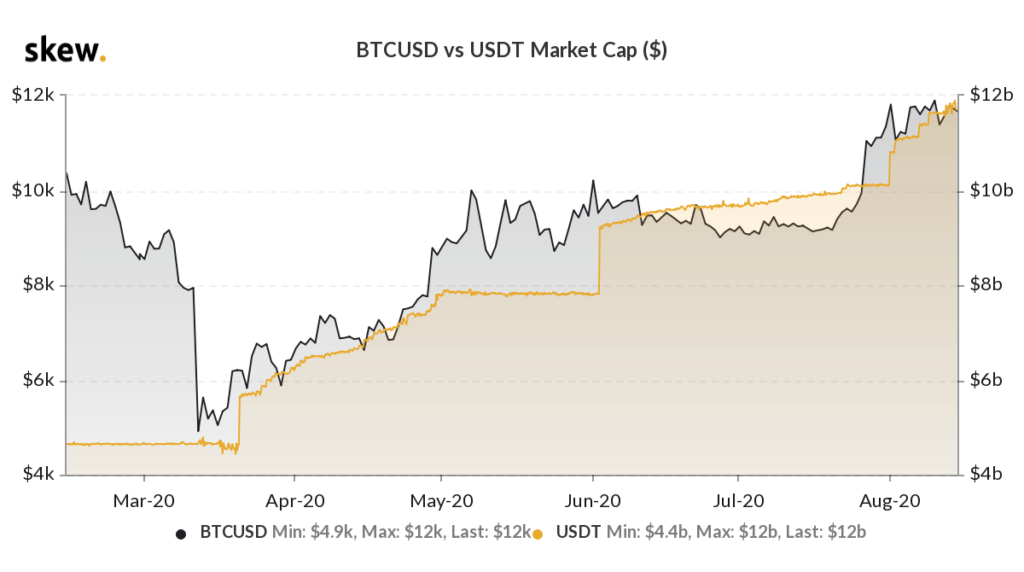 Charles Edwards, a digital asset manager noted that the rising supply of Tether is a catalyst for Bitcoin. He stated that the 26% increase in Tether is one of the eight fundamental factors that is driving BTC upward. This he said:

This is a reinforcement of that which he had earlier stated in a tweet saying that “major changes in Tether’s market capitalization have led Bitcoin’s price over the last 1.5 years.”

Other positive macro factors that have led up to Bitcoin’s bullish sentiment include institutional adoption, the weakening of the U.S. Dollar amid liquidity pumps which is prompting some analysts to predict new highs for BTC before 2021.

After Bitcoin recovered from the March market carnage, it showed a decoupling from stocks while it began its correlation with gold. On a bigger scale, Bitcoin and gold one-month correlation grew closer, reaching as high as 68% before a little retreat.

However, analysts advocate for cautiousness in using gold to deduce Bitcoin’s price activity due to a low three-month correlation coefficient which is presently at 15%.

Notably, gold and Bitcoin have been buoyed by the recent monetary easing measures, if this scenario extends, then the gold and Bitcoin correlation may be quite important to pay attention to in the medium term.